Jacob Fisher is a US Navy Combat Vietnam Veteran who served with Commander Destroyer Squadron 25 in the Gulf of Tonkin and the South China Sea, in 1966-1967 aboard several US Navy Destroyers in Naval Communications.
He returned to Vietnam after almost 40 years in 2005 and spent almost a month traveling in and around Vietnam on a bicycle.
While in Hanoi on his return trip he had the honor of spending the day and having dinner in the home of his tour guide Diep To and her family, only to discover that Diep’s father, who along with others, was involved in the negotiations that ended the Vietnam War, with Henry Kissinger and the US Government.
In an attempt to honor Diep’s Father and his associates, “Jake” promised to return one day and build a small village school, to honor all those who had negotiated the end of the war.
Along with financial support from others, construction on the small school was started in the fall of 2014 and finished in early 2015. 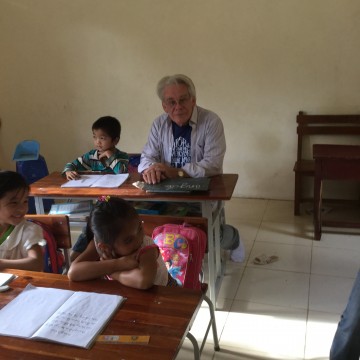 “Jake” returned to Hanoi in December of 2015 to visit the school and the children for the first time. The experience was far more rewarding than “Jake” could have ever imagined. He was shocked to learn that Diep To along with co-workers and others in her family had also personally invested much of their own hard earned money in the rehabbing of several homes in the village along with the construction of a village community center.

The idea behind all the work being done in the community is so that tourists visiting Vietnam, can experience life in small village, as it has been for many generations and, how Diep To along with her family and friends hopes it will continue for many more generations to come.

“Jake” is thrilled that Diep was his tour guide back in 2005 and now more than ever he is proud to be a “Peace Ambassador” on such a worthy project and, to be considered an important part of Diep’s family.
When “Jake” visits Vietnam now, it’s like going back home and he can’t wait till he returns home the next time 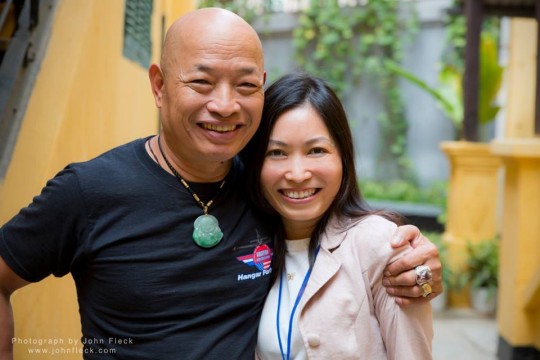 Pilot Hong My and Diep To

Nguyen Hong My was born in 1946 in the central province of Nghe An. While he was studying at the Hanoi University of Economics in 1965, he passed an examination and was sent to take pilot training in the Soviet Union, together with 120 other young men. Hong My was one of 19 graduates to fly the MIG – 21. He and his comrades joined the war one month after returning home in 1968. They were stationed at the Noi Bai , Vinh, Thanh Hoa, and Kien An – Hai Phong airports. In early 1972, the US sent to the war in Vietnam 1,000 tactical fighters, and 150 B52s. The Vietnamese Air Force had only 180 Mig fighters, a few ground to air missiles, and radar. January 17, 1972, was the first day pilot My encountered American fighter jets. He and his partner Le Khuong fired 8 missiles off the mark. 2 days later, they went on another sortie.

Pilot My was granted the Ho Chi Minh order after his victory for shooting down the first American fighter jet. He shot down 2 more jets during his 6 years in the military. During an airstrike in 1972, My’s MIG-21 was shot by Daniel Edwards Cherry flying a F4. My’s two arms were broken and he was demobilized. After that, he returned to studying economics.
In 2007, American brigadier General Daniel Edwards Cherry visited Vietnam and met with his one-time enemy, former MIG – 21 pilot Nguyen Hong My. General Cherry invited My to the US in 2009 and the Governor of Kentucky conferred on him the honorary rank of Colonel. My’s photo was put on an American stamp. 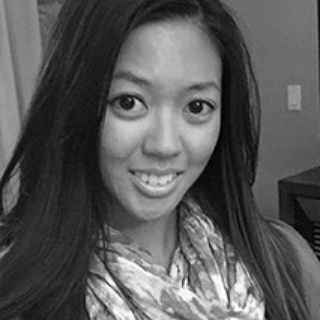 VIETNAM – USA FRIENDSHIP VILLAGE
Nàng village is one of the five villages in Pù Bin. It has about 100 households living, mostly ethnic Thái. Come to Nàng, you will feel like getting lost in a heaven with witnessing the clouds wrapped around the mountains, enjoying the beauty of verdant terraced fields or the villages located in the edge of forest. Participating in the daily activities through vibrant local encounters, then relaxing and enjoying the lovely sunset at the late afternoon among the majestic mountains are the unforgettable experience you would never want to miss when visiting this wonderful place.
This village has been the cultural friendship village between Vietnam and USA. The Friendship Village provides educational and vocational opportunities for people staying in Pù Bin. By performing daily tasks, the local people will learn new approaches and enhance their skills. In addition, foreign friends will have a chance to immerse themselves in the local community and interact with people in need for a better life.

© Diep To Foundation 2015. All Rights Reserved.